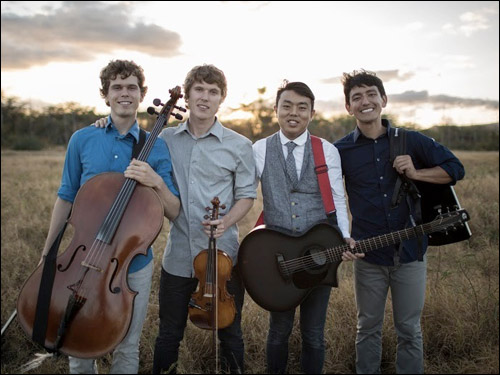 Streetlight Cadence is a four member acoustic ensemble comprised of Jonathon Franklin (violin and vocals), Brian Webb (cello and backup vocals), Jesse Shiroma (accordion, percussion, and backup vocals), and Chaz Umamoto (guitar and harmony vocals). Often labeled as indie, folk, or alternative, the band draws inspiration from many genres. They perform both originals and covers ranging from pop to classical and have often been described as a synthesis between Mumford & Sons and The Killers.

Created under the streetlights of Waikiki; Streetlight Cadence started as nothing more than a hopeful dream of earning a few dollars on the sidewalks to pay for groceries and has now grown into a band with an international fan base. From the streets to the stage, the band continues to thrive through friends, fans, a passion for music, and a bit of wild luck.

Streetlight Cadence will take the stage at 1:30pm. Click here for a complete schedule.