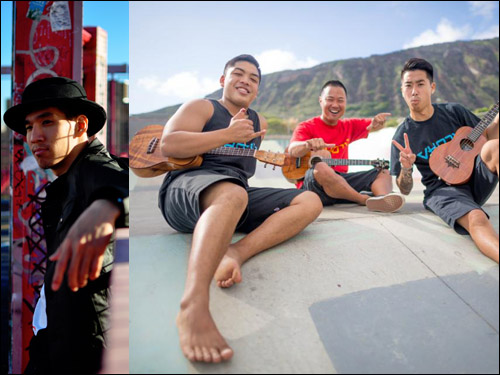 Heart & Soul is the dynamic `ukulele trio of Jody Kamisato, Micah Ganiron and TJ Mayeshiro. Together they represent a new breed of music fusing island sounds with a contemporary edge.

Currently Heart & Soul is performing twice a week at Disney’s Aulani Resort and Spa on Oahu. They are the featured act in the Starlight Hui show and will be taking their music internationally as they set foot on a Japan Tour this fall.

Jason Tom is an award-winning Chinese American beatboxer based in Honolulu, Hawaii who has opened for the likes of Michael Winslow, Blue Scholars, Quest Crew, the JabbaWockeez, and Jake Shimabukuro (TEDxHonolulu). As a beatboxer, Tom was also a First Thursdays’ Hawaii Slam 2012 Grand Poetry Slam Finalist.

Heart & Soul and Jason Tom will take the stage at 2pm. Click here for a complete schedule.